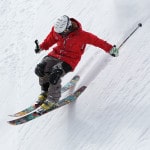 It’s that time of year again. There is snow in the mountains and the resorts are full of skiers. It also means that this is the time of year for knee injuries. There are roughly 15 million skiers in the US who are participating in an exhilarating sport where knee injuries account for 30% of END_OF_DOCUMENT_TOKEN_TO_BE_REPLACED

I visited Dr. Gibbs for a climbing injury (ruptured distal bicep) that happened early on a Friday morning. I called their office and was able to get an appointment only a few hours after the injury happened. Dr. Gibbs was quick to recognize what the injury was. He answered all my questions and was good at explaining the surgery that I would be getting and what to expect after surgery. We were able to get surgery scheduled for the following Wednesday. With this type of injury it is better to get it fixed sooner rather than later. Surgery went well and I had no pain at all after the nerve block wore off (~20hrs). After the splint came off (9 days later), my arm was fairly stiff but that's expected after no movement. Dr. Gibbs was there to show me a picture of how bad my tendon was, what size hole he had to drill in the bone and what he did to my tendon to get it re-attached. He told me to go home and take the tape off and take a shower. When I did that I noticed 2 stitches sticking out fairly far. I wasn't sure what to do with them but I figured they were dissolvable so I left them there. After a couple weeks I was getting curious about when they would fall out or if they should have been pulled out. So I emailed Kaitlin (his aid) she was quick to respond and let me know what I could do with them. I've been working on getting my rotation and flex back into my arm for a couple weeks now and that's been a little hard to get it back to 100%, I'd say I'm about 90% at the moment, but I am able to straighten my arm fully with out any stiffness, which is what I was mostly worried about. Dr. Gibbs, overall has been great to work with and I would definitely recommend him to any of my friends that have this type of injury.

Ask us anything
Loading Comments...
We have made some changes to protect your health and safety. Learn More
Hello. Add your message here.